He probably sang it with these words: “Arglwydd, arwain trwy'r anialwch”, which translated strictly into English comes out as “Lord, lead me through the wilderness”. 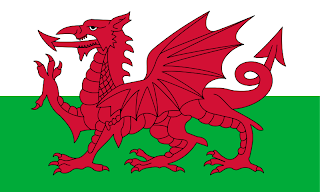 William Williams is called the “Sweet Singer of Wales”, and “Watts of Wales” (see the Welsh flag here), because of his life’s contribution of over 800 hymns (his English counterpart, Isaac Watts, wrote some 750 in his lifetime) to Christendom. He spent over 40 years of the 18th Century travelling throughout Wales to spread the message of God in his native tongue, but what motivated his creativity in 1745 when he wrote the words we today know as “Guide Me, O Thou Great Jehovah”?
Williams (also known as Pantycelyn, for the town in mid-Wales) was like his English musical cousin, Isaac Watts, in more ways than one. Besides being among their homelands’ most notable Christian hymn writers, both Watts and Williams were unconventional, challenging the orthodoxy of the established religious systems where they were raised. Like Watts, Williams became a ‘Nonconformist’ at some risk to his chosen livelihood. He’d committed himself to Christ at age 20 in 1737, and was headed into ministry in the Church of England in 1740; soon thereafter in 1743, because he was active in Methodism (started by the Wesley brothers, John and Charles) and the revival its proponents led, he was turned down for the priesthood in the state-approved church, a break that he may have suspected was coming. His activities had already been reported to religious authorities in 1742. This was the same year that his father, also a Noncomformist, had died. So, one can imagine Williams might have felt the sting of his personal and vocational trials during the early and mid-1740s. Despite this, he stayed the course, leading many to belief over the 43 years of his active ministry life. He must have felt the rightness of his convictions, and no doubt leaned upon God’s message for strength. His prose in “Guide Me O, Thou…” shows he identified with biblical predecessors who also were struggling after being cast into the wilderness. His reach for their difficult, but exciting, experience may have been metaphors for his own walk. This was the point at which he might have faltered, yet he remained steadfast.  It is widely said that among Williams’ most well-known hymns, “Guide Me, O Thou …” is perhaps the most revered. Could it be that it spoke most clearly of his own experience, to those who knew him best?
Williams wrote of Israel’s wandering in the desert clearly in three of the original five verses (one, two, and four) he composed for “Guide Me, O Thou Great Jehovah”. His bible open, and his pen at hand, Williams felt himself being a pilgrim, perhaps alone at times. He needed an injection of confidence that the Almighty was near – the pillar of fire and a cloud that overshadowed the people who stumbled through Sinai. And, water…it could refresh or it could drown. Israel needed him to provide this vital substance to sustain them, but also to divide it at the Jordan so they could live. Were Williams’ needs in 1745 similarly plain, yet impossible? At least, without Him, they were. William Williams was armed with his bible and his experience from the previous few years, and his thoughts crystallized in a form that has lasted for 250-plus years. Williams’ method isn’t worn out. Try it on when you got something that’s plain, but clearly impossible without Him.
See more information on the song discussed above in The Complete Book of Hymns – Inspiring Stories About 600 Hymns and Praise Songs by William J. Petersen and Ardythe Petersen, Tyndale House Publishers, 2006.  Also, see Amazing Grace: 366 Inspiring Hymn Stories for Daily Devotions by Kenneth W. Osbeck, Kregel Publications, 1990; and Then Sings My Soul – 150 of the World’s Greatest Hymn Stories, Robert J. Morgan, Thomas Nelson Publishers, 2003.

To see all five of the original verses, see here: http://www.hymntime.com/tch/htm/g/u/i/guideme.htm

A brief biography of composer: http://en.wikipedia.org/wiki/William_Williams_Pantycelyn

For the Welsh history of the hymn’s tune, see here: http://en.wikipedia.org/wiki/Cwm_Rhondda
Posted by David Cain at 1:12 PM