Where He Leads Me I Will Follow -- Ernest W. Blandy 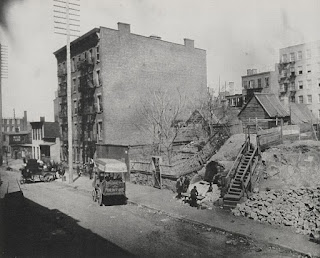 Just look at these pictures (shown here, in 1890 and 1915, respectively) of this slum, and see if you think the poet-composer should have reconsidered where he was about to go. Just the name of the place -- Hell’s Kitchen -- might have given Ernest W. Blandy serious pause, yet he must have really thought that “Where He Leads Me I Will Follow” to himself as he prepared for this change.  One of his contemporary hymn writers (Fanny Crosby) had likewise made the same choice to live in a NYC slum, so Ernest may have felt he should expect nothing less of himself. Did Mr. Blandy have some affinity for the Irish immigrants that lived in this poverty-stricken, crime-ridden area? We can only speculate, but we know that Ernest didn’t try to outthink what he was doing. He just followed. 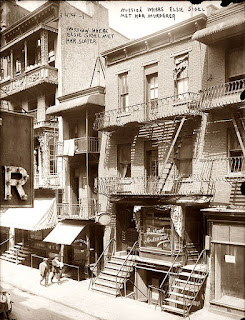 Little is known of Ernest W. Blandy, except that he evidently had a strong faith and worked that out in a ministry in this aforementioned slum.  He was reportedly an officer in the Salvation Army, so he must have been accustomed to spending a lot of time with poor folks in rough circumstances. Given the choice of an assignment at a decent church (unknown location) and Hell’s Kitchen, he chose the latter in 1890. He apparently felt, according to the words of “Where He Leads Me…”, that the Lord was directing him there. Had family, friends, or other acquaintances asked him to explain this apparently radical choice, which would expose him to probably daily hazards? After all, this rough neighborhood had earned its name; a mission house was there, and though Ernest may have indeed been familiar with it because of his role as a Salvation Army member, it was also associated with a murder some 15 years later (see 2nd of the two pictures above). Hell’s Kitchen was overcrowded and inhabited by crime gangs, so lawbreaking was a way of life for many of its residents. Step on others, or be stepped on yourself. Ernest’s musical response to these issues was not terribly involved – just a few words were all he used. Ernest heard and followed (v. 1), including through anticipated life-threatening circumstances that were perhaps only somewhat less hair-raising than Jesus’ own footsteps through the garden and into unfair judgment (vv. 2 and 3). One can fathom that Ernest’s sense of duty compelled him to mimic Christ’s determination. Like Jesus when he did the dirty job of washing feet (John 13), maybe Ernest considered his own trial in Hell’s Kitchen would be acceptable because he knew he was headed for a glorious home, eternally (v.4). He reasoned he could go ‘all the way’ (refrain) while here on earth. We may not know much of Ernest Blandy, but his choice for Hell’s Kitchen and the rationale he shares in “Where He Leads Me …” perhaps say all we need to know.

Ernest was glued to Jesus Christ, we could say, except for one bit of truth. Ernest had a choice. He could have gone to the established church and been relaxed, safe. Perhaps Jesus was more like the strong magnet for Ernest, with an attraction he just couldn’t ignore. Or, how about a persistent sound? A wind chime at my neighbor’s house has a deep, resonant bong when the wind blows, and my ears just cannot disregard the sound at night. Ears do not just shut off, with the flip of a switch. (My solution is to drown it out with something louder.) Ernie Blandy had ears, too, ones that could hear that divine bong. The Son has something you and I cannot discount. Is that what He meant when he said he would draw others to Himself (John 12:32)?

See very brief information/biography on composer and all four verses of the song, see the following site: http://www.hymntime.com/tch/htm/w/h/e/r/wherehlm.htm

See this site for general description of the area where the composer was headed: https://en.wikipedia.org/wiki/Hell%27s_Kitchen,_Manhattan
Posted by David Cain at 12:08 PM 1 comment:

Home of the Soul -- James Rowe

Did this 47-year old English-born journeyman ever feel that he’d discovered his true calling professionally, his ‘home’, or the position where he sensed that his Creator had placed him for his truest service? By the year 1912, maybe James Rowe could say that, as he compared that place to the “Home of the Soul” he expected to inhabit in the not too distant future. Albany, New York (see this panoramic shot from 1906, perhaps not too different from what James may have seen) was probably the place that James Rowe had begun to think of as his physical home, though England was his native land. His home vocationally, if he had in fact found it by 1912, had likewise come by a circuitous route. Perhaps James’ meandering path had given him a greater appreciation for the home upon which he knew could depend to outlast all the others that he encountered.

If a person’s most prolific life output is an indicator of his true calling, then James Rowe must have sensed his was in the musical field for some time, given what he eventually contributed in this field of endeavor. He must have been engaged for many years in writing the over 9,000 hymns, poems, and other works attributed to him, though how he made his daily living did not necessarily reflect this musical habit for some time. He worked in Ireland’s government for a few years before moving to the New World by 1890. Once settled in Albany, he worked variously for a railroad and for the Hudson River Humane Society for many more years, before pursuing music more intentionally as part of three music publishing enterprises in Texas (Trio Music) and Tennessee (A. J. Showalter and James D. Vaughan Music Companies). We can presume much of his music output was produced during his years associated with the music publishers, yet one does not suddenly have an awakening to this role; instead, James must have nurtured this inclination for some time before focusing on it more completely. Whether “Home of the Soul” was a product of his railroad/Humane Society years or later when he was active in music publishing is unknown. But, his vision of ‘home’ was no less clear, no matter the physical or occupational dwelling where he found himself in 1912. Perhaps like most workers, James must have been tired at times, a condition to which he alludes in his poetry (‘labors are o’er, rest…’ [v.1], and ‘sweet rest’ [v.2], and ‘Rest to our souls…’ [refrain]) repeatedly. Did the jumping from one type of work to another disturb James too, an aspect of his mortal life that he longed to relinquish (‘…never to roam’ [refrain])? Without more details of his motives for crafting “Home of the Soul”, one can only conjecture that James endured work’s tedium as most of us do periodically; perhaps his poetry/hymn-writing was therapeutic, allowing him to imagine the time and place when the daily workday would be in his rearview mirror. That wouldn’t be surprising for a mid-life 47-year old, would it?

James Rowe’s view of home versus where and when he lived says something universal. Even as I experience a home with probably more comforts than James had, things break. I can move about, tantalizing my fascination with different places, sights, and sounds – indeed all five senses can join in the fun! Yet, I get tired of it, don’t you? I need rest, even from the things I like to do. Is it therefore possible that this ‘home’ is too draining? I think I will need to re-tool at some point, including new parts and new places, new experiences. Where can I go, where upgrades are unnecessary, where everything is new perpetually, and yet it is home? James knew. Do you?

See also some biographic information on the composer here: https://hymnary.org/person/Rowe_James

He’d recently moved to a new city, and had a close and abiding connection with his God, something he probably really needed as he went about acquainting himself with new surroundings and people. Was it any different for Thomas R. Sweatmon than it would have been for you or me, as he mulled over “Walking Alone at Eve” in 1917, after having moved from his native Georgia to Louisville, Kentucky? Can anyone truly say he likes to be alone all of the time? Was this true of Sweatmon, or did he consider seeking out crowds, perhaps even at one of Louisville’s largest crowd-gathering places – the Kentucky Derby venue at Churchill Downs (shown here in 1901)? These questions must have crossed Thomas’ mind, not just for himself, but in order to consider the lives of people he contacted as a minister. Reading what this minister wrote one hundred years ago, you could conclude that he thought solitude was not such a bad deal.

The 41-year old Thomas Sweatmon was no stranger to music nor to people, since he was a minister and a singing school teacher by trade. He wrote the lyrics to a few dozen hymns in his lifetime, but probably contacted many more students and others to whom he ministered in his life, even by the time he penned the words to “Walking Alone at Eve”. So, what would have been on the mind of a minister who’d spent perhaps the bulk of his day relating to others, perhaps including dealing with some conflicts?  Was ‘Walking Alone…’ a reflection of what he felt at the end of a typical day for himself, a need to decompress and just rest in the presence of the Divine One? Or, was it advice to others that he conveyed, a message that they too should ‘be still’ (Psalm 46:10)?  Whomever the audience was, the sentiment for alone time with the Creator was not a one-verse phenomenon, for Sweatmon transmits this message in all three stanzas. He recommends star-gazing (v.1), dusk-watching (v.2), and meditation (v.3) as methods to enchant one’s soul with His eternal assurance. Drawing close to God was apparently not a spontaneous, accidental effort for this minister. To really hear Him and appreciate His ultimate gift was an intentional solitary experience, according to Thomas. Aside from his few dozen hymn poems and the details above, we know little else of Thomas Sweatmon, yet this much is clear: He made time for uninterrupted moments to search Him out, and he found Him. The hurly-burly of life didn’t drown out the whisper of Deity.

Is there a closet for me? Is there someplace away from the noise, but somewhere that I don’t risk suffocating seclusion at the same time? The movie Castaway (Tom Hanks) is one that alarms the solitude advocate, for can the human animal endure being alone? Would I not descend to calling a volleyball ‘Wilson’? Fortunately, God doesn’t enforce solitude on most of us in this way. He doesn’t expect me to adopt a monk’s habits for days or years at a time. Yet, don’t forget how Elijah was able to gird himself for life…listening to a whisper in a cave’s mouth (1 Kings 19). Thomas Sweatmon must have thought Elijah had discovered something valuable. Find your closet or cave – and Him, therein, at least for a few minutes.

Some scant information on the composer here: http://www.hymntime.com/tch/bio/s/w/e/sweatmon_tr.htm
Posted by David Cain at 12:43 PM No comments: