He Leadeth Me – Joseph H. Gilmore


It was wartime, and he was filling in for an absent speaker one Sunday. Joseph Gilmore must have wondered what was different about this time that he delivered a message on a familiar subject that he’d spoken about before. His focus zeroed in a just one thought for some unknown reason, and what he said dwelled on the minds of his hearers. He wasn’t even aware of his own effort’s fruitfulness until years later, when he visited another church and found his penned words in a hymnal. What a shock, especially for this minister who wasn’t really in the habit of writing poetry for songs. That’s a brief snapshot of what this fellow did to bring about “He Leadeth Me” on March 26th, 1862. The story’s message just might make one think, “I might never be aware just when and how my own thoughts will be used”.

Joseph Gilmore was substituting in a Philadelphia church that early spring in 1862, and his message on a well-worn subject was the topic of conversation well after the morning’s sermon, and would have implications for many years beyond. Psalm 23 (see here one artist’s conception of this well-known text) 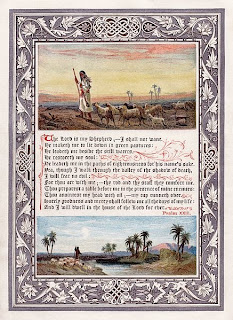 was something he had spoken about on several other occasions, but this time he somehow couldn’t get past the words ‘He leadeth me…’ (verse 2). He speculated himself that perhaps the Civil War’s events were weighing on him, for by that time most Americans had concluded that the war was going to be long and brutal. The people would need a leader of divine nature, no matter where the war’s circuitous path might take them. It’s not specified, but residents of Philadelphia would undoubtedly have been supporters of the Union, and by inference, of President Lincoln. Did he sense the president and the Union needed God’s providential intervention? That afternoon’s discussion at the home of one of the church’s deacons spurred Gilmore toward still more thoughts of God’s leading. As the conversation continued, Gilmore scribbled some words and absentmindedly handed the paper with his meanderings to his wife, not knowing the effect this simple act would have. She apparently was struck by her husband’s prose, and gave them to a Boston publication, whereupon they were subsequently set to music by one of the period’s artists, William Bradbury.  Still, Gilmore knew nothing of these events until three years later. Opening a hymnal in Rochester, New York, where he was interviewing for a pastorship in 1865, he was surprised to find his own familiar words, paired with music. Did that church know something he didn’t, when he came to interview? Did his reputation precede him? Maybe so, and maybe it wasn’t an accident that Joseph Henry Gilmore became the pastor of that Baptist church.

Gilmore wrote the texts for only a few other hymns, and it’s reported that none were as enduring as the one he composed in just a few moments in 1862. Perhaps its developmental history says something about how a song of lasting quality is born. Gilmore’s thoughts had centered on Psalm 23 before, but as he suggested, the crucible of the war may have provided the key ingredient that triggered its rise, even if this crisis was only in his subconscious. In Gilmore’s experience, he also must have sensed that his hearers were validating his sermon’s thoughts during that afternoon at the deacon’s home. ‘Let your insides speak to you, and listen to that voice that seems to be nudging you’, you can almost see him murmuring to himself as he scrawled the words on paper. He preached on His leading, and then he followed his own advice. Is He leading you somewhere, compelling you to say something? How about following through on that?
See more information on the composer and the song in Amazing Grace: 366 Inspiring Hymn Stories for Daily Devotions by Kenneth W. Osbeck, Kregel Publications, 1990; The Complete Book of Hymns – Inspiring Stories About 600 Hymns and Praise Songs by William J. Petersen and Ardythe Petersen, Tyndale House Publishers, 2006; 101 More Hymn Stories, by Kenneth W. Osbeck, Kregel Publications, 1985; and Then Sings My Soul, by Robert J. Morgan, Thomas Nelson publishers, 2003.

See following link for all 4 original verse that the composer wrote: http://www.hymntime.com/tch/htm/h/l/e/hleademe.htm