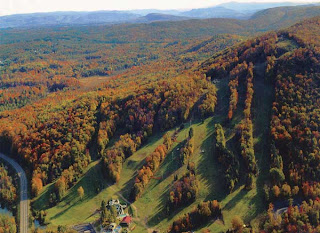 May the glory of the LORD endure forever;
may the LORD rejoice in his works—(Psalm 104:31)

Henry Van Dyke was inspired when he was 59 years old, although what caused his inspiration was probably not unlike what he had probably seen many times before. The hymn’s genesis was over 100 years old already, a timespan that the timeless God might call young, really. Three artists contributed to the hymn “Joyful, Joyful, We Adore Thee” over the 125 years of its birth, development, and complete fruition. There was a fourth – he was actually the first -- whose original imagination connected in a unique way with the last of these artists.

Henry Van Dyke apparently saw something in the Berkshire Mountains (see picture) in western Massachusetts that year of 1911, something that motivated him in an artistic way, similar to his two German predecessors who wrote about their emotions in a compelling way. Friedrich Schiller wrote “Ode to Joy” in 1785, nearly 40 years before his compatriot Ludwig Van Beethoven borrowed its theme and many of its words to compose his choral-orchestral Ninth Symphony in 1824. Some 87 years later on the other side of the Atlantic Ocean, Van Dyke was visiting a college to preach a message, and wrote the poem that called out to the same sensation that had motivated his ancestors. It’s said he immediately directed the college’s president to use Beethoven’s music in concert with the poem. So, could that have been the hymn’s premier?  What were Van Dyke’s sermons like during that visit? Perhaps someone remembers and has recorded them, but nevertheless this joyful hymn is a sermon all by itself, and one that is well-known both inside and outside of the church. One wonders if Van Dyke insisted on the Schiller/Beethoven connection with his poem in order to appeal to the secular world, as well as to those of Godly faith.  To whom was Van Dyke writing in his hymn?

The easy answer, looking at his own words, is that he’s addressing God. ‘Thou’ and ‘thee’, the poetic equivalents of ‘you’, are used liberally by Van Dyke as he lauds Him. Consider the first few words he composed. Is ‘Joyful’ a name for God, according to Van Dyke? ‘Joyful, joyful, we adore thee’ – it sounds like an address. If that’s what Van Dyke intended, he indeed created something unique, for God is not addressed this way biblically, at least not directly. Did the composer see something in the Berkshire Mountains that drew him nearer to God’s creative genius? Undoubtedly. Genesis tells us that God saw it was good to create, so He must have felt some emotion, a divine satisfaction. Is it joy when a mood takes me to another plane, next to Him, even? That’s what He does for me, especially those days when I’ve had enough of the ‘here below’. The Creator-Joyful’s mountains communicate volumes, lifting the human spirit. Schiller and Beethoven, though most often considered gifted secularists, also reflect Him. Look at Schiller’s Ode to Joy. He knew joy’s author. Maybe a more perfect joy was what the stone deaf Beethoven – by the time he wrote his Ninth Symphony – was reaching for too, when he composed. Joy. It’s Him, and it’s our way to Him.

Information on the song was obtained from the books  “Amazing Grace – 366 Inspiring Hymn Stories for Daily Devotions”, by Kenneth W. Osbeck, 1990; and “The Complete Book of Hymns – Inspiring Stories About 600 Hymns and Praise Songs”, by William J. and Ardythe Petersen, 2006.

Also see the following websites for information on the hymn’s tune, which was set to music by Beethoven in ‘Ode to Joy’. Ode to Joy was also a poem written by Friedrich Schiller in 1785…see the link to it here:
http://www.raptusassociation.org/ode1785.html