Crown Him with Many Crowns – Matthew Bridges and Godfrey Thring 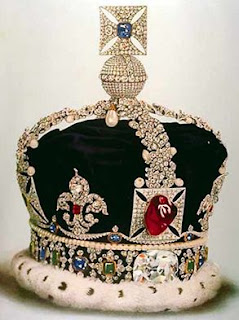 It was (and should still be) a popular hymn, if knowing its history is any indication. It was written by not one, but two composers, a generation apart. Something well-loved is something to keep fresh, to renew its meaning and appreciation by those who use it. Matthew Bridges started it in 1851 and Godfrey Thring continued its development 23 years later in 1874. “Crown Him with Many Crowns”…perhaps that was a call these composers took to heart as they cultivated and produced more verses, musical crowns, to enthrone Him.
Bridges and Thring came from similar backgrounds and contributed to His kingdom in many similar ways in 19th Century England. Matthew Bridges was an Anglican who converted to Roman Catholicism in 1848. Three years later he composed the hymn’s original verses, at least four of the eventual nine verses, although some believe that the hymn actually had as many as 12 verses, with Bridges writing six of them and Thring another six some two or three decades later. Bridges’ verses, as one might think, had some meaning for him as a Catholic, while Thring’s verses emphasized themes that Protestants could appreciate more. It’s thought that Thring wrote additional verses for this very reason, at the request of an associate who did not approve of the reference to the virgin Mary in one Bridges’ verse as the ‘mystic rose’. Both men were 51 years old when they composed their works, and produced either many hymnals or other works both before and after “Crown Him with Many Crowns”. Crowning Him wasn’t just words of theory with either believer, then, but a lifelong endeavor. Some circumstances at age 51 moved both Bridges and Thring to honor Him. Are there clues in the themes of the verses for you and me, things that might resonate with someone at the half-century mark, or elsewhere along life’s path in the 21st Century?
To be sure, both Bridges and Thring must have been familiar with Revelation 19:12, and the awe-inspiring scene there. The Lord wears many crowns, John tells me. So, perhaps it’s fitting that there are as many as twelve crowns to consider in this time-tested composition. Nine of the twelve verses are known, with evidence that some mixing of the verses’ words has also been a feature of this hymn over time, making its exposition challenging. But, the themes, and the message that He can be praised for the many facets of Him and His kingdom, are not confusing. Crown Him, because He’s the perfect Lamb; the Peace; the sum of Life; the Son of Man; Love itself; Lord-King over what’s above and below; the Redeemer, whose infancy fulfilled prophecy; heaven’s preparer and caretaker; and time-ruler. No other being has all these qualities, or even one of them. How does He wear all these crowns at once? One of His mysteries, and something more to discover up there. Don’t you love a mystery?
The source for the song story are the books  “Amazing Grace, 366 Inspiring Hymn Stories for Daily Devotions”, by Kenneth Osbeck, Kregel Publications, 1990; and also “The Complete Book of Hymns – Inspiring Stories About 600 Hymns and Praise Songs”, by William J. and Ardythe Petersen, Tyndale House Publishers, 2006.
See also the following site for nine of the song’s verses:
http://www.hymntime.com/tch/htm/c/r/o/crownhim.htm
See also this link for further history on the songs verses:
http://wordwisehymns.com/2011/01/14/crown-him-with-many-crowns/
Posted by David Cain at 3:00 PM