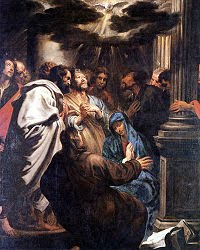 Reginald Heber died too early, tragically most would say. In Calcutta, India one hot, humid Sunday in 1826 he preached to a crowd, and very suddenly suffered sunstroke and died. He was just 43 years old. But, the song words he wrote to His God, and that we now sing, didn’t end with his physical demise, for his wife and friends gathered Heber’s hymns that he had written – 57 of them – and published them. The words he wrote enrich our worship of God and give us a glimpse of the man who was known for his character, his decency. It’s no surprise that Heber, a man respected by those who knew him, would be in touch with God’s holiness, and that he wrote these words to coax us to do the same. It’s said that Reginald Heber was searching for a song for Trinity Sunday (it comes eight weeks after Easter), and decided that he’d write his own words for the occasion, since he could not find another. Kind of amazing if you think about it, for the doctrine of the Trinity had been codified in Christianity several hundred years earlier. In 325 A.D., the council of Nicea (in modern-day Turkey) had determined that the Bible teaches something quite profound -- that the Father, Son, and Holy Spirit make up the Godhead, the Trinity. If you look on the margins of the sheet music for Heber’s song, you might even see the word ‘Nicea’ there, a reminder of that historic event 1,500 years before the tune written by John Dykes in 1861 was paired with Heber’s words to produce this song. One cannot miss in Heber’s words, and in his collaborator’s efforts too, the primacy of the message. God’s purity endures. I wonder if Heber’s last years, indeed his last moments, made this song more meaningful for him. Heber spent the 1823-26 years in India, and labored in a climate that wore heavily upon him physically. Heber’s wide-ranging responsibilities, as bishop of Calcutta, India, and of Ceylon, and Australia too, must have also been overwhelming at times. ‘How did he manage this?’, we might ponder. I might have quit, told my superiors ‘I’m chuckin’ this’, and gone home to the easier life of England, where Heber was born, educated, and ministered for 16 years before traveling to south Asia. Instead, Heber delivered God’s message, a testimony of His holiness to a nation mired in a caste system, rife with injustices. Who better than Heber, who sought God and patterned his own life after Him, to spread His hope to the poor and disadvantaged in India? How did he manage? Seeing God for who He is, in His unpolluted, unstained, eternal form can compel us, even transform us, even though it may cost us our mortality. I’m gonna try remembering that when I sing Heber’s song next time. Information on the song was obtained from the book “101 Hymn Stories”, by Kenneth W. Osbeck, Kregel Publications, 1982.
Posted by David Cain at 6:09 PM